So far I am sure that you have been able to pronounce the names of the places that we maybe posted to in Zambia, but this one I am pretty sure has got most of you tongue tied. To help you out I am going to give you my own phonetic pronounciation- "Chee-toe-co-low-key" the emphasis is on the first syllable. 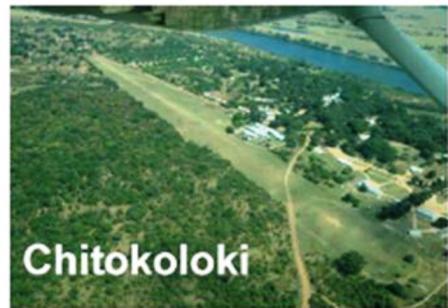 Chitokoloki is a Mission Station situated in the Northwest Province of Zambia at a remote location on the close to both neighboring countries of and . There are only two modes of transport for reaching Chitokoloki; first by road and second by air. By road it is approximately 12 hrs or 650 kilometers from the capital Lusaka, a very long and tiring trip as the road condition is extremely poor.The option of travel to Chitokoloki from by plane is much quicker and more convenient as there is a landing strip on the and the flight generally takes between 2 and 3 hours. Plans are being made to base an aircraft here to serve the mission hospital. The hospital contains 283 beds divided into three wards. The newest ward contains 85 beds and is used for primary care and treatment. The second ward or "old hospital" contains 88 beds and is used for out patient, lab work, teaching and other things. The remaining 110 beds form the "colony" which is the TB and leprosy settlement. In 2004 the hospital had over 12,000 admissions and saw over 19,000 outpatients. Three community health centers are also supported from Chitokoloki. Within a one hour flight there are a total of 5 hospitals all of which have access to a landing strip. One of the clinics, Dipalata would also like to build an airstrip for better access, and have identified land for that purpose. Other clinics in the area would also be interested in air support. Although the mission station is well equipped, it is remote and would be similar to living in the . Not temperature wise, but it is in its own little corner of the world. Please pray with us as the leadership of the Flying Mision decides where to base us. We are excited about the possibilities and places where we may end up. Our God is an awesome God and we look forward to serving Him wherever that may take us. When will we be departing? Well the mission would like us sometime this summer. Our support continues to come in and we are very greatful for all of you that give to and pray for us. As the support comes in our departure becomes more of a reality. Our support is in the 35% range so there is a ways to go, but we know that with all your prayers and encouragement God has it all in His control. As the school semester comes to a close this week we are going to be hitting the road, so we look forward to seeing some of you and to making new friends.