So I was looking through our pictures and found some from a trip we took up to the extreme northern part of Angola, to a place called M'banza Congo. It reminded me of a passage in the Bible that speaks of removing the log in our own eye before worrying about the speck in your brother's eye. M'banza Congo was one of the traditional capital cities, before and for a time after colonization. We were going out there to pick up one of the Doctors that we work with after he had been doing an eye clinic for two weeks. Dr. Collins is one of only two Ophthalmologists that work outside of the capital city of Luanda, he typically spends two weeks at home in Lubango and then two weeks on the road doing a clinic and operations. A regular clinic can see him doing over 50 operations and more than 300 consultations, did I mention that he is 72yrs old?! Anyway, we loaded his equipment, his assistant, and of course himself, into the plane. The good doctor was a little more animated than usual, which is saying something. He said that a young man had come in with a severe injury to his left eye, he had fallen about a month previously and had gotten poked in the eye. It was obvious that the eye was beyond saving and would have to be removed, but when Dr. Collins said this, the patient said "No" and left the clinic. A couple days later the family returned with the young man and said that the pain was too much for him and that he needed the eye taken out. The operation went smoothly and while checking the eye socket to make sure that everything was clean Dr. Collins noticed a small sliver of what he thought was bone fragment. As he began working to remove it, it quickly became evident that it was no bone fragment, but a sliver of wood and not just a sliver of wood, but a fragment of wood. This fragment wasn't just a fragment, but a stick, about 5cm or 2in long that had gone around the side of the eye and embedded itself behind the eyeball! This guy had been living with a stick behind his eye for a month and figured he could live with the discomfort. The reality is, is that without taking this "post" out of his eye it would have eventually gotten infected and killed him. Makes me wonder what kind of things are in my life that I think I can keep or continue doing that won't affect me. 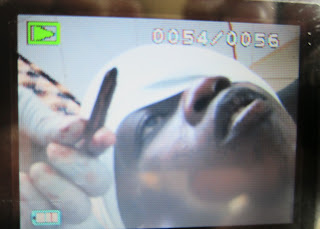 The actual stick with the patient.

On a side note, we are back in Canada to help our youngest Matthew, get set up on his own. We will be kicking around till at least the middle of April. Give us a call or drop us a line, we would love to hear from you.
Posted by The Sporadica at 3/16/2012 09:20:00 am