As the World Turns

I just noticed that we haven't made an update for almost a month. We were also told that our blog was boring, BORING, can you imagine that! So in an attempt to spice things up a bit I have decided to use a different font! No more boring ARIAL for us! Today we will be using TREBUCHET!. So without further adieu here is our blog in Trebuchet.

Things are going well. Kait got over her malaria pretty quickly, which was a blessing and Tami got back from a two and a half week dental appointment in Windhoek. Took a little longer to get her tooth fixed than expected, plus she gets to go back before the end of October for one more final tweeking. Oh well, what can you say except that things happen a little differently here then back in Canada. I, Gary, finally got my Angolan pilots license and completed my MAF check out on the Caravan. 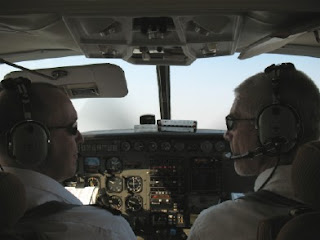 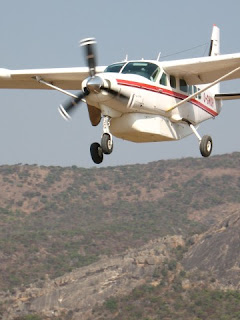 Approach for landing at Mukwando.
The runway is inside a dormant volcano!
How cool is that?! 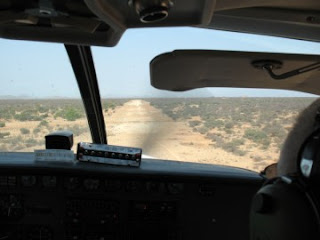 Checking the runway at Virei to see what condition it is in. 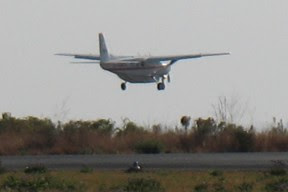 History in the making, first solo departure!
On Thursday I got to make my first solo trip in Angola! A three hour flight village in south eastern Angola called Mavinga, on the trip was a group from the Norwegian Relief Council that was finishing an aide project they had been doing there. This village has many people from opposing sides of the war living in it and it is good to see that they are working and living together in peace. The following day we took a group of Angolan ladies from one of the local churches out to another village called Chipindo where they spent the weekend helping the villagers in any way they could. It was a privilege to help these ladies as they were helping their follow Angolans spiritually and physically. 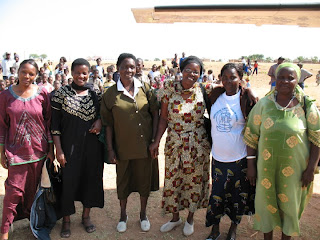 Church ladies from Lubango that ministered in Chipindo.

They were planning on returning to Lubango by truck, and I don't mean a nice Ford or GMC extended cab with cushy seats, more like in the back of an International Harvester 5 ton grain truck. They were very happy when we worked out a deal so that they could fly home in an hour instead of riding in the back of the truck for over 12 hours.

Last, but not least we wanted to include a picture of the lastest addition to our family, Dexter 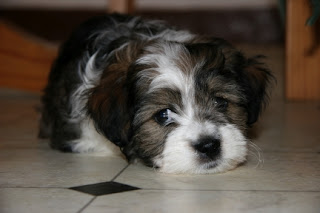 Thanks for taking the time to check out our blog, we look forward to hearing how things are going in your part of God's creation.
Posted by The Sporadica at 10/06/2007 03:31:00 am

Congrats on the flying stuff, well done! I love the pictures of the people you are working with.

it's so sad that your dog has no legs. He seems saddened by it also. Do you just pull him around by the tail?

How could ANYONE say that a story about ANGOLA is boring?!?!? Come on people, if you think it is boring come on over... and let the Goertzen's show you some excitement. Try living without power, driving over the Mitcha road, going to church, traveling by road to Namibia to visit us!!!!! Life is anything but boring in Angola!!! Doesn't matter which font you use Gary!

Congratulations Gary!! This is awesome for you and the ministry. What wonderful opportunities to fulfill what God wants you to do there. We will continue to pray for you and the family for safety and good health.

By the way, the house that you lived in Lacombe is up for sale again. It is now listed at $480k. Wowsers eh?