Finally, a moment to fill you in! 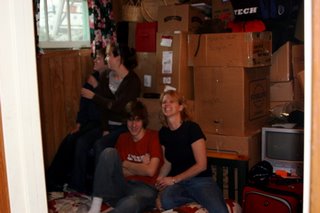 To say things have been a little crazy the last few weeks would be putting it mildly. Since we last updated you we have participated in a missions conference in Three Hills, stripped and shingled the roof at Tami's parents house, packed up all our wordly belongings and put them in storage and then moved to Boise Idaho for the next four weeks. Tami commented that after 21yrs of being married we can still put all of our stuff into one bedroom and that includes all the kids stuff as well! God has graciously allowed us to be mobile and not get too encumbered with stuff...at least that is what we tell ourselves.

Since we have been in Boise I, Gary, have been hitting the books and taking ground school classes at MAF US that will help prepare me for the unique flying conditions encountered overseas. I haven't spent that much time in class and doing homework since...I don't know when! It has been great, the instructors and staff have been fantastic and I am excited about getting in the plane on Monday and starting to fly. The guys that I will get to fly with are truly some of the best in the world when it comes to flying the Cessna 206. I look forward to soaking up as much of their teaching as possible.
As far as Tami and the kids go they have been settling into the home schooling routine. We are in a two bedroom condo so the kids are sharing a room. They have been just awesome about it, we thank God daily for the amazing kids He has blessed us with.

Some day it will make for a really funny story, which it kind of is right now, but we really need it to get to Angola so they can take care of my work visa. Thanks for all your prayers and support we'll update you next week on how things are going and the saga of the passport. Drop us a line and tell us what you are up to, we would love to hear from you all!

You KNOW this is just God's way of getting you ready for this continent! Can't wait until you get here, and I can't believe how quickly it is going! Let us know what day you will arrive in WINDHOEK... we will be there to see you or collect you IF THE LORD IS WILLING (get used to that phrase... we learned it well from the Jouberts!)!!! Love you guys, miss you like crazy!
Love,
Charlene